A Jumpin' Night In The Garden of Eden 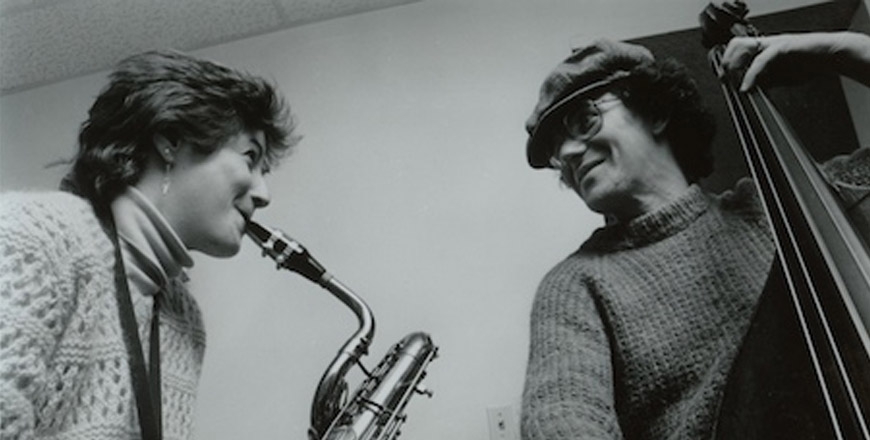 On Thursday, April 1 at 7pm ET, the Yiddish Book Center hosted a Zoom Q&A with Director Michal Goldman. Click here to watch a recording of the discussion.

A special presentation in collaboration with The Yiddish Book Center.

We are thrilled to present this newly restored version that has long been out of distribuition!

A JUMPIN' NIGHT IN THE GARDEN OF EDEN was the first film to document the klezmer revival, tracing the efforts of two founding groups, Kapelye and Boston's Klezmer Conservatory Band, to recover the lost history of klezmer music. For nearly a millennium, this vigorous and soulful music was part of the celebration of Jewish life in Eastern Europe. In the early decades of this century, the music took root in America. Klezmer musicians learned hundreds of tunes by ear and their ears were open to Gypsy, Ukrainian and Greek melodies of the old world, as well as to the new sounds of American jazz. Music born in Eastern Europe lived on in the imaginations of composers for New York's Yiddish theater, men whose tunes entered the mainstream through such unlikely adapters as the Andrew Sisters. Eventually Klezmer went underground as its audience assimilated into mainstream American culture.

A JUMPIN' NIGHT IN THE GARDEN OF EDEN is about the process of reviving a lost musical tradition, taking klezmer tunes through transcription and rehearsal into performance. Lively, clever, and often humorous, this film contains rare footage of klezmer's immigrant elder statesmen, now no longer alive—including Dave Tarras, Leon Schwartz, and Ben Gailing—and their dynamic encounters with the brilliant younger musicians who have become Klezmer's leading luminaries. Henry Sapoznik, Hankus Netsky, Michael Alpert, Judy Bressler, cornet player Frank London, and the jazz musician Don Byron are all here in their early days.

Michal Goldman’s documentaries look at how people define and express the urgent issues of their times through the way they live their lives. She produces, writes, and edits her films, which include: A JUMPIN' NIGHT IN THE GARDEN OF EDEN, the first film to document the revival of klezmer music; UMM KULTHUM, A VOICE LIKE EGYPT, about the diva of Arabic song and her country; EPIPHANY IN PROGRESS, about the first year in an inner-city Episcopal school; and AT HOME IN UTOPIA, telling the story of a cooperative apartment complex at the edge of Bronx Park built by immigrant communist factory workers in the 1920s.

Her work has won the Academy Award and the Golden Plaque: Documentary – History/Biography (Chicago Film Festival). She was the recipient of the first Promoting Tolerance Award from the American-Arab Anti-Discrimination Committee. She is founder and President Emerita of Filmmakers Collaborative, and founder of the Boston Jewish Film Festival.